The History Of  Louvered Roofs

The History of Louvered Roofs

Since the early 1950’s homeowners have been more and more using their patios as outdoor living areas.  Fabric and aluminum awnings were invented which offered shade and some rain and snow protection but lacked the ability to allow natural sunlight to come into the home when needed.  Many products have been invented over the years including stationary and retractable fabric awnings. Pergolas were also designed using aluminum and vinyl which allowed more light coming in the home but lacked protection from the elements. The Luxaflex ad below is from 1959.

In the past few years, aluminum and steel panel patio covers have become popular.  These were great for keeping the weather off the patio and deck but blocked most of the natural sunlight from getting through the patio windows and doors.

As mentioned each of these patio covers was useful for some things but lacking in others. Those who had good protection of the patio did not allow natural light in the home when needed. Those that did allow light were not good for sheltering and protecting from the elements.

Louvered roofs were invented for customers to finally get the time they wanted to spend on their patio or deck.  They were constructed with slats that opened and closed to provide shade, natural light, and protection from the elements as needed.  The invention allowed for much more use of the patio as well as optimal protection of furniture, pets, and outdoor appliances.

The first manufactured louvered roofs were invented and produced in Australia in 1984 using steel coil that was roll-formed into an 8” wide center pivot louver.  The strong steel allowed it to span up to 12’ without bending. It had cast aluminum ends which pivoted in a slot on an aluminum angle (the product is still in production).  Different louvered roofs were invented in France, Israel, New Zealand, and other countries over the next twenty years.

Coming to the USA

In the early 2000s, louvered roofs began to find their way to the USA from Australia and Israel.  Then manufacturers began to pop up in California, Georgia, Alberta Canada, Arizona, and Kentucky these manufacturers used aluminum instead of steel for the louvers but the other features were basically the same.

Louvered Roofs were designed in one of two ways; Center Pivot Design and Bottom Pivot Design

Currently, there are 7 first-generation louvered roof manufacturers in the USA and Canada.  2 of them are bottom pivot and 5 are center pivot.

The center pivot design is easiest to open and close because the louvers are balanced on a pin in the middle. This allows for very little stress on the opening and closing mechanism and motor.

Some center pivot louvers are not designed to be very strong and can only be manufactured in 9’ to 12’ length which greatly limits the size of each bay.

Louvers with the center pivot design are typically 6” or 8” wide which allows for about 80% of the natural sunlight to come onto the patio and in the home when needed.

The center pivot design comes with a full perimeter gutter to catch rainwater from all sides and direct it where the customer wants it to go.

The louvers are easily connected to a pivot bar which rotates them open and closed all at the same time.

The bottom pivot design allows for louvers up to 24’ long supported by and connected to rafters beneath every 3 to 4 feet.  The louvers on this design are typically only 4” which restricts more natural light plus they can only open a little past 90° so they are unable to shade and catch light beyond that point. They cannot be made to look flat and the rafter grooves are unsightly.

The bottom pivot design makes the louvers top-heavy so that when they close passed the 90° point the weight transfer causes them to flop and creates as much as 500 lbs. of stress on the motor and mechanism.

The mechanism to open and close the louvers is internal in each of the rafters and hard to get to with mechanical problems.  When this happens all of the louvers must be removed to gain access to the mechanism.

The new generation louvered roofs have quite a few improvements. These are directed toward allowing the customers even more time spent on the patio as well as taking advantage of new technologies and improved strength in structure design.

There are several new generation louvered roofs now manufactured in countries across Europe including Spain, Belgium, and Italy, and 3 manufactured in the USA.  None of these manufactures have elected to use the bottom pivot design.

Here is a list of 8 improvements these companies have in their designs:

The Sundance Louvered Roof is the only new generation louvered roof having all of these improvements (see drawing below). 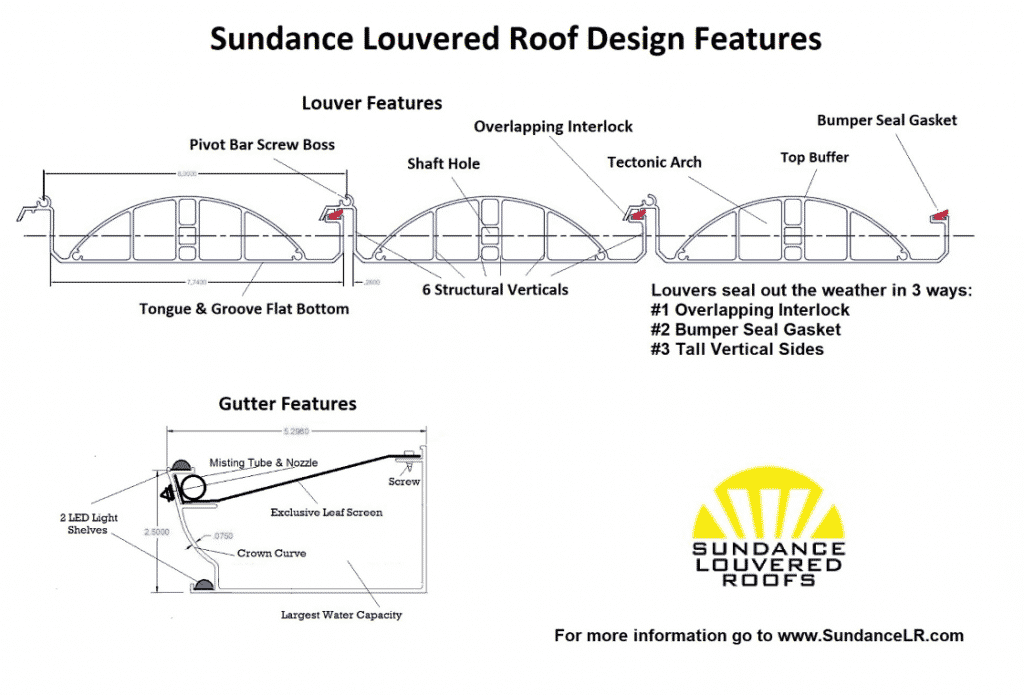 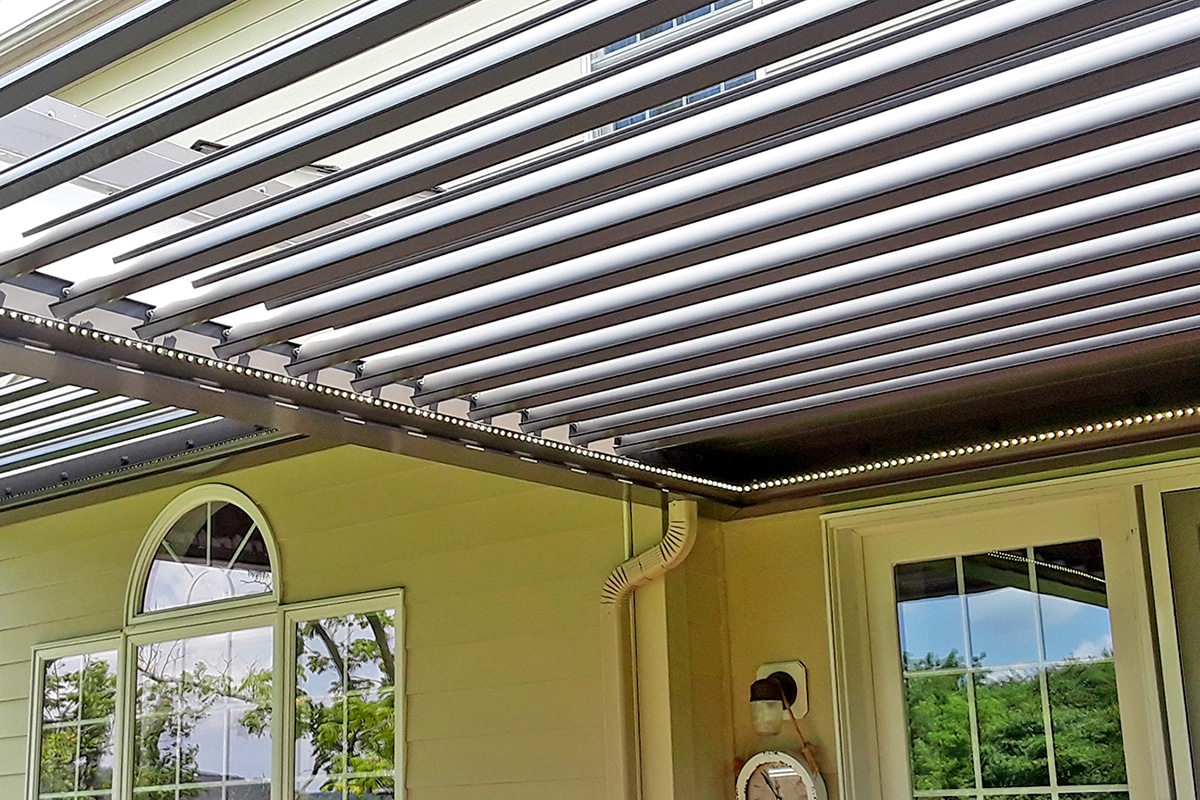 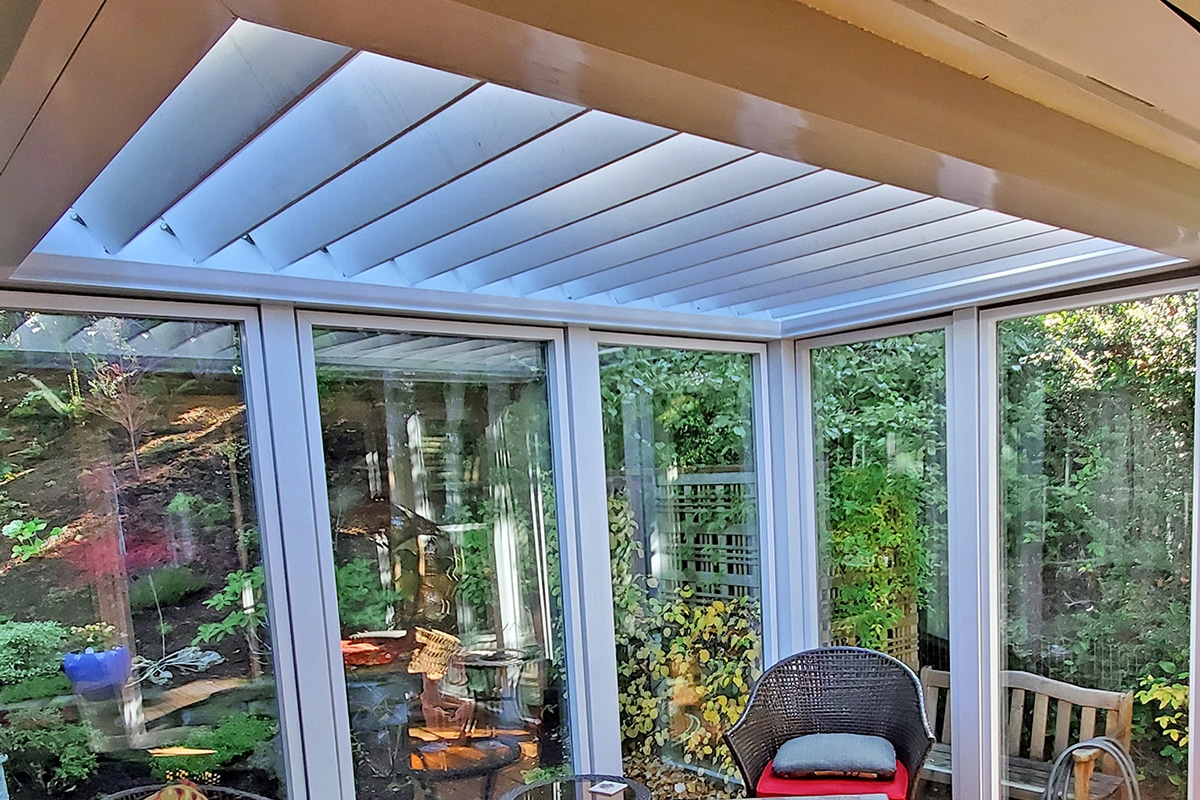